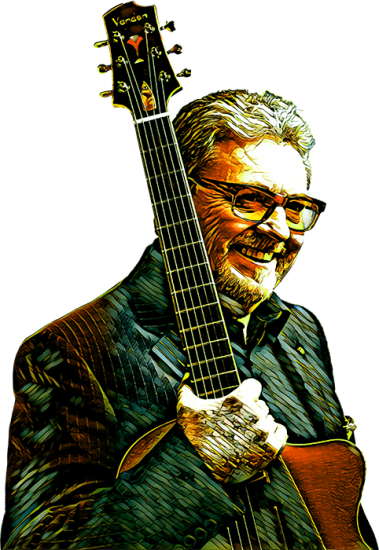 There can be few musicians out there better suited to perform the music of Django Reinhardt from Hot Club of France days or the later big band days with the iconic bands of Duke Ellington and Dizzy Gillespie than maestro guitarist Martin Taylor.   As well as having an obviously deep personal attachment to this music, Martin Taylor has also over the course of his long career  worked many times with Reinhardt’s closest musical collaborator Stéphane Grappelli, and of course with his own highly acclaimed ensemble “Spirit of Django”.  All of this, combined with innovative arrangements by Bill Dobbins, Christian Jacob, Geoffrey Keezer, Martin Kershaw and Florian Ross, give “in The Spirit Of Django” the seamless  fusion of French Musette, European and American Jazz influences that was the music of Django Reinhardt.

This show is a merger really of two performances – The SNJO and Martin Taylor’s own gypsy jazz band ensemble of guest musicians – Adam Bulley (Rhythm Guitar), Christian Garrick (Violin) and Karen Street (Accordion), and it is interesting to see how each in their own way bring out the spirit of the music of Django Reinhardt, and how collectively they play with the new arrangements for this show.  Much of the music in these two sets consists of specially arranged medleys, but in here too are some of Martin Taylor’s own compositions given the “big band sound” make-over – “Musette for a Magpie” and “Chez Fernand”.  One of my favourite moments from this evening though was a duet between Martin and Karen on one of my favourite songs of all time, and one of the most beautiful love songs of all time –“ Hymne a l’amour”. This wonderful song of Edith Piaf (co-written by Edith Piaf and Marguerite Monnot) about the loss of the one true love of her life Marcel Cerdan seemed to take on an extra special resonance with the sadness to a piece of music that somehow an accordion seems to be uniquely able to convey.

This was one of those evenings where everything seemed to be working.  Martin Taylor was always going to be amazing to listen to, and the SNJO were always going to be on their best form playing with him, but together they brought out a little bit more in one another’s performances – particularly in the far looser encore.

Review by Tom King for the Southside Advertiser, Sept 2017