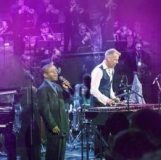 The Scottish National Jazz Orchestra, playing the songs of Mancini and Mandel featuring Joe Locke and Kenny Washington, brought a slice of classic Hollywood film music to The Queen’s Hall in Edinburgh for this show. END_OF_DOCUMENT_TOKEN_TO_BE_REPLACED