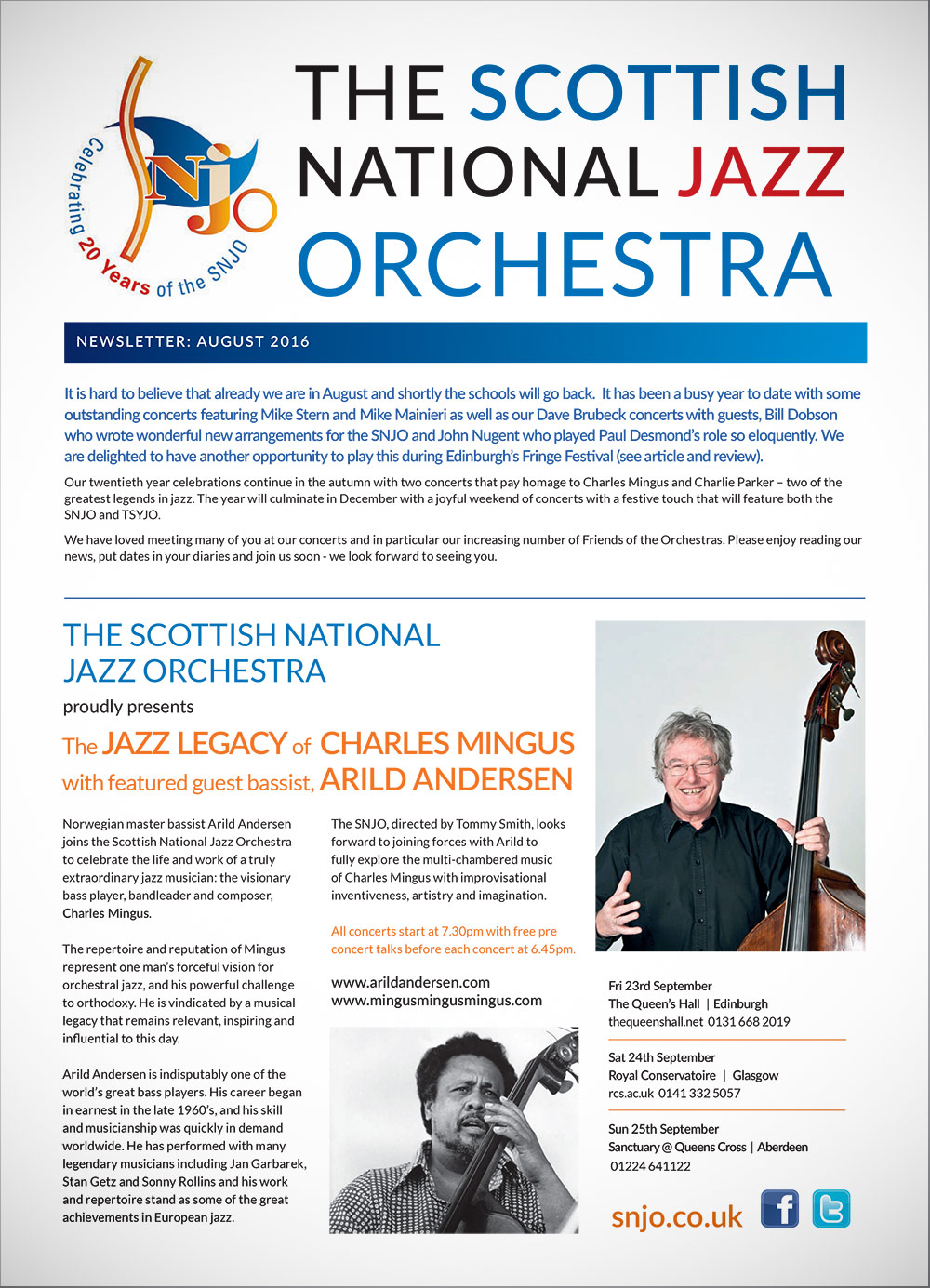 It is hard to believe that already we are in August and shortly the schools will go back. It has been a busy year to date with some outstanding concerts featuring Mike Stern and Mike Mainieri as well as our Dave Brubeck concerts with guests, Bill Dobson who wrote wonderful new arrangements for the SNJO and John Nugent who played Paul Desmond’s role so eloquently. We are delighted to have another opportunity to play this during Edinburgh’s Fringe Festival. END_OF_DOCUMENT_TOKEN_TO_BE_REPLACED 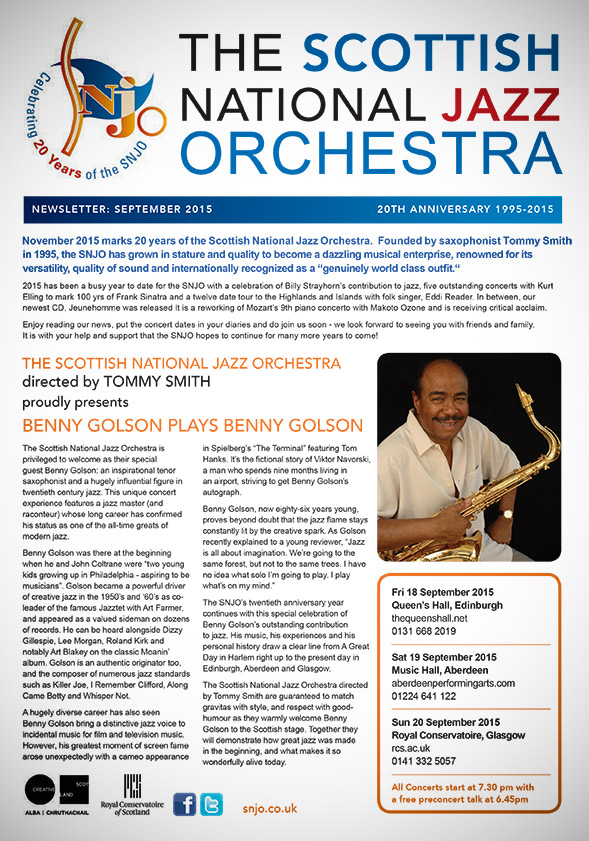 November 2015 marks 20 years of the Scottish National Jazz Orchestra.  Founded by saxophonist Tommy Smith in 1995, the SNJO has grown in stature and quality to become a dazzling musical enterprise, renowned for its versatility, quality of sound and internationally recognized as a “genuinely world class outfit.“

2015 has been a busy year to date for the SNJO with a celebration of Billy Strayhorn’s contribution to jazz, five outstanding concerts with Kurt Elling to mark 100 yrs of Frank Sinatra and a twelve date tour to the Highlands and Islands with folk singer, Eddi Reader. In between, our newest CD, Jeunehomme was released It is a reworking of Mozart’s 9th piano concerto with Makoto Ozone and is receiving critical acclaim.

Enjoy reading our news, put the concert dates in your diaries and do join us soon – we look forward to seeing you with friends and family.   It is with your help and support that the SNJO hopes to continue for many more years to come! 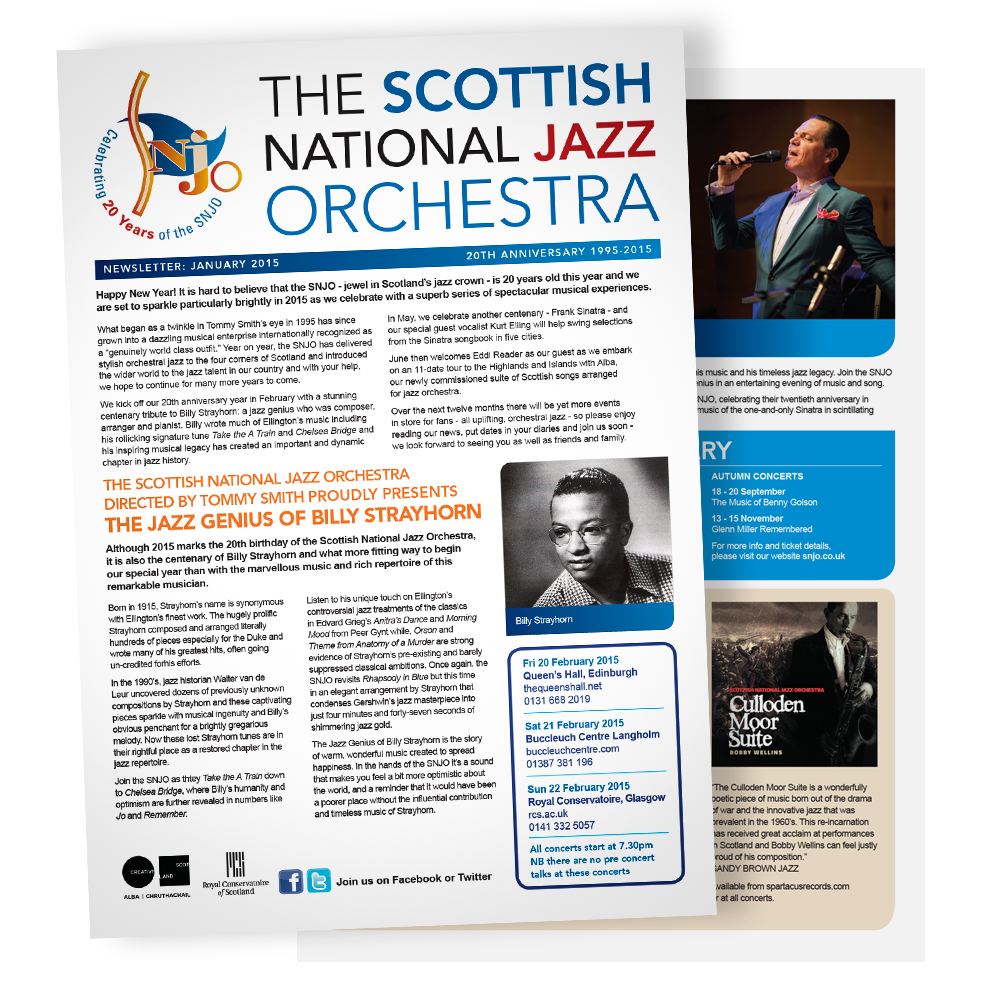 Happy New Year! It is hard to believe that the SNJO – jewel in Scotland’s jazz crown – is 20 years old this year and we are set to sparkle particularly brightly in 2015 as we celebrate with a superb series of spectacular musical experiences. END_OF_DOCUMENT_TOKEN_TO_BE_REPLACED