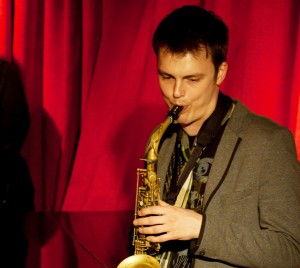 Paul Towndrow was born in Bellshill in 1978. He acquired his first instrument, a Jupiter alto with a strength 4 reed, aged 11 and made his first sound on it eight days later. He went on to win The Peter Whittingham Jazz Award in 2002 and the World Saxophone Competition Audience Prize in 2003. He has released several albums under his own name, the most recent being ‘Newology’ (Keywork Records). He is also one quarter of the group Brass Jaw.

Besides music, Paul spends much of his time running, in part to satisfy his marathon training programme, but more often to get to his next gig on time.